How do you ignite motivation when stalled? Or perhaps, you perceive need for a kickstart elsewhere.

To write or not to write?
That is the question.

Well, not the entire question.

How to ignite a dormant fraction of an idea that briefly appears – and perhaps even feels momentarily brilliant…before it evaporates in a mist of uncertainty? Ghostly voices echoing unimportant not good enough who cares…before sinking it into the muck of inertia.

So I plod on, searching for the proper mix of kindling.
To ignite…to spark.
To silence the ghosts.

To harness the energy in such short supply.

My current mantra…
Hold on.
Begin.
One sentence at a time.
The purpose will make itself known…

…When I was in college I wrote every day. Didn’t think twice about it. Not just research papers. Or chemistry lab reports. But a personal journal with a jet black cover given to me by a girlfriend – a full size sketch book.

Questioning. Worrying. Wondering. Planning.
What if? Why not? Why now? How will I? Should I? Oh no.

Careful script or hurried scrawl. Grand calligraphy moments of introspection.
Unfiltered and often painful, it was all there…

This past summer, I revisited – and read – what I had written decades ago.

Pages of words to heal.

Time to let them go.

…ponder what it means to be a child. 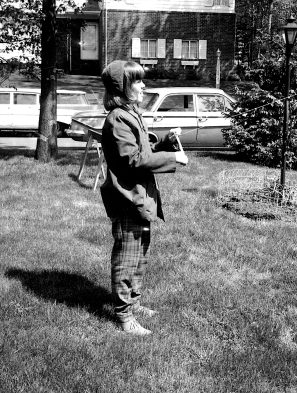 To be a child…Part One.

Eyes first opened onto a world to explore.

To wonder. To question. To know.

I took my cue…

Slammed that screen door
And ran out.

Outside
My respite. My peace. My place.
Fueling many Part One days…
An endless horizon of hope.

What does it mean to recover? What would full recovery look like, and is there such a thing? Recover from what?

Everything else you grow out of, but you never recover from childhood.

Time to come in for dinner!

It became kind of a family joke when I was a kid – that I often ended up needing stitches on Thanksgiving…or Easter. Usually a holiday with visiting grandparents. More than once.

I’m not sure how many times it actually happened, but as I recall I’d be sent outside to play while the turkey was roasting. In my dressy clothes and patent leather shoes, I’d start running around like usual…climbing the monkey bars…swinging on the swings…riding my bike. Jump roping. Inevitably, without my “play shoes” on, I’d slip and fall. Many times on the cement patio or out in the street. Back then, we played in the street. Kickball. Baseball.

Before long there was blood everywhere…a huge gash on my chin, forehead or knee. At the same time the turkey was just about ready to carve.

I’d ruin the rest of the day as someone would have to take me to the Emergency Room – or the pediatrician’s office…who would be called in on a holiday (this was the 1950’s & ’60s…and they did that then) to stitch me up.

I obviously healed and recovered from the consequences of my holiday mishaps. The stitches were eventually removed. The scars faded, but remain….

I was branded for the duration of my childhood. My fearlessness and budding athleticism were not what a girl should be. My mother enrolled me in the “Junior Miss Club” when I was about 10…where I was supposed to learn how to be more ladylike. It met weekly after school and included practice walking with a book on my head. The goal was to keep it there. Boring as sin and to this day I am mystified at why that was a desirable skill. Ballet was almost as frustrating. Too slow and regimented. Baton twirling lessons were a disaster.

Girls who liked to play outside and get dirty and collect bees in jars and play baseball in the street were not “normal” girls. We were called tomboys. And grew up to prefer jeans to dresses. My poor mother desperately wanted me to be a normal daughter. She never got what she wanted, despite her heroic efforts. Which continued through my high school years.

Nobody has a perfect childhood. Nobody.

However, I have to believe some sort of recovery is possible…

Depending on the scars…

And how fast they heal. 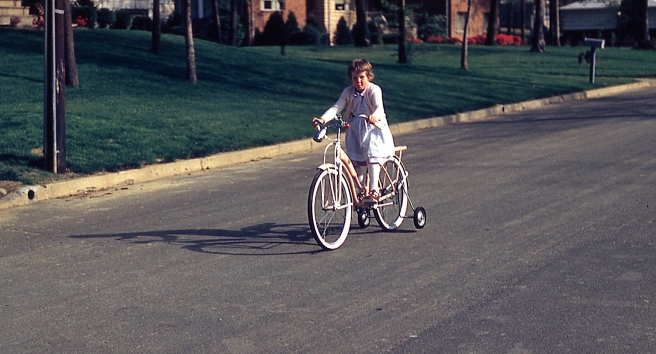 This week, let’s think about the beliefs – personally, socially, culturally – that define our realities.

The most profound disappointment in life is when your truth is not believed.

When reality becomes distorted. By people who matter. And even by people who don’t matter.

But those close to you…that’s when the knife cuts the deepest. Because the hope hangs on. And on. And on. Maybe if this, maybe if that….then they’ll believe me.

Wait, I know that’s what happened. I was there. I heard it. I saw it.

But what if we are programmed from an early age to tell the world – or, more specifically, our world – family, friends – no everything is just fine.

My father would stare into the sad face of one of his children and chant over and over: Don’t Smile! Don’t Smile! Don’t Smile! Laughing…as he repeated his mantra. He’d crouch down and get right in front of a small unhappy face, his mouth stretched tight in a wide grin. His brown eyes, behind thick glasses, betrayed the frivolity. They were mocking. Perhaps fearful.
As if we presented the impossible possibility that one so small and helpless could struggle with an emotion so complicated, so fraught with need.
Need for compassion, understanding, some measure of support. Validation. That we mattered.

I understand now why. He had no idea how to respond. Maybe he was overwhelmed. As it reflected his own dark emotional beliefs. The message: Don’t Be Sad. Deny the Sad. It’s not okay.

Of course, it didn’t take long for our smiles to take shape. If for nothing else, to make the laughing father stop. Smiles did not match up with the eyes or heart. And especially they did not reflect our truth.

My mother, on the other hand, would ask us what we did wrong to cause this emotion that made her so uncomfortable.

I didn’t know what to believe.

Inspired by V.J.’s Weekly Challenge: Just when I thought…

Life seldom unfolds in straight lines. It’s not necessary to repeat the prompt phrase, but this week let’s think about the times when life has turned an abrupt corner, or caught us off guard.

This topic jettisons me back almost 30 years to one of those moments. Which caught me off guard…and remains clear in my memory even now.

You hear so much advice as a new parent. Or a young parent. It comes at you from every direction. Other parents. Friends. Family members. Books. Magazine articles. I’m talking pre-internet…when I was raising children.

In the midst of all this advice, there were times I neglected the inner barometer. My parenting radar and instincts still not fully developed.

My 3 year old son’s 8 month experience at a local daycare center was one of those times. When I should have picked up on the signs. That it wasn’t the best place for him; even at only 2 days a week.

Irritability. Anger. Clingyness. But not all the time. I increasingly felt something was off, but rationalized my uneasiness…as over-reacting to normal toddler adjustments.

Until an exchange one evening while changing his diaper. When paying attention became front and center. And a turning point for me…

The words jarring and new…from a child who talked little. Dark green eyes glanced up at me, and then away.

I froze; his two ankles balanced between the fingers of my left hand as I tried to still their movement. He was anxious to be off the changing table. Arms and legs swinging up. Down. Sideways. Body twisting. Trying to roll over. Two damp middle fingers plunged deep in his mouth. No more words came as the sucking became rhythmic.

With my free hand, I smoothed blonde hair back from his forehead.

His eyes met mine. Sweetie…You are a Good Boy. A wonderful boy. And I love you!

I pulled the diaper up between his legs and gently held it on his belly. I let go of his legs. They scissored the air like bike pedals. Wrinkled fingers slid out of his mouth.

I leaned closer…You are the best boy in the whole world.

He strained to be upright. I pinned the diaper, pulled up the pants and stood him on the table. We were almost eye-to-eye.

I felt my outrage growing, the tears close behind….

You Are A Good Boy.

I kissed his cheek. Wrapped my arms around him. Lifted him up. He hooked his little boy legs around my waist and rested his head on my shoulder. His body finally still.

I knew there was only one place he could have heard those words…and gotten that message.

I withdrew him from the daycare center.
I quit my consulting job.

And learned a hard lesson…

Children let you know what they need.

Living in the northeastern United States, I have endured many snowstorms, blizzards and variations on the theme of freezing rain and sleet. Along with gloomy cloudy skies for days on end – with matching sub freezing temperatures.

I know there are people who enjoy the sitting-by-a-roaring-fire aspect of that time of year…known as late fall, winter and early spring where I live. They enjoy wearing multiple layers of cozy flannel shirts, wool socks and thick sweaters. Before venturing outdoors. To navigate the front steps. Which are icy.

I was lucky enough to vacation there 6 or 7 times. Just my husband and me. Our two children came along twice. They loved it too.

In 2006 – my last visit there – it was me, myself and I.  Back when I could travel easily. Hustling through an airport with several suitcases…not a problem. Eating whatever and wherever I wanted to. Enjoying local cuisine…with no worries or restrictions.

And most importantly: the energy to walk and explore for hours.

All it takes is a simple twist. Or two. Or three. Of wire, silk and nylon.

Six strings stretched tight. But not too tight. The ends threaded into post holes. Then twisted…little by little…with the turn of a peg. Carefully. Adjusting the tension.

Until each one – when plucked – sounds…just right.

On a simple guitar made of wood.

My first – and only – no-name guitar shows its age. As do I.

I headed to guitar lessons taught by a local folk singer. For weekly group lessons with other aspiring young guitarists…struggling together to strum chords…

Added Em and B7…and we managed to make it through Cruel War.

By that point the fingertips on my left hand were sore and complaining. From pressing down on those strings…especially strings 4, 5 & 6…the thickest ones.

Those twisted strings were replaced many times. As I sang and played through a thick looseleaf binder of mimeographed folk songs assigned by my teacher. To which I added my carefully typed copies of Homeward Bound, Hey Jude, It Was a Very Good Year, Leaving on a Jet Plane…among many others. Guitar chords written or typed in red above the words.

I did not sing or strum with much finesse, but it was the 60’s after all – and it was fun.
It never occurred to me to take it more seriously. I never saw any female guitarists on Ed Sullivan or American Bandstand, heard any on AM radio or in my stack of 45s.

This guitar went to camps and college with me. It was then retired to a closet…until my son tried it out after his college days. It traveled up and down the east coast with him for a few years…until he had a guitar of his own. Like his dad…and his sister.

And now it is back here with me.

Ready for its next chapter.

one letter UP ~ diary 2.0
Blog at WordPress.com.