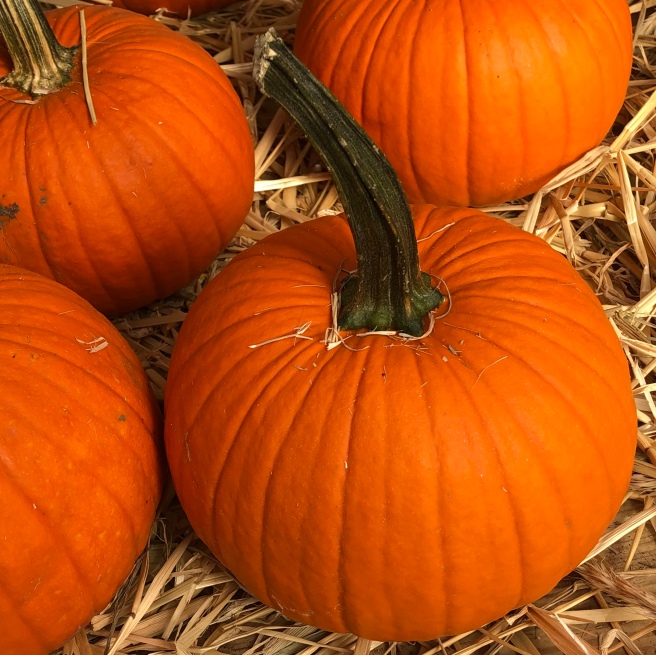 Pumpkins are everywhere this month…so I am including a few in BeckyB’s October lines & squares challenge. It seems appropriate.

Of course I could also include pumpkin muffins, pumpkin pie, pumpkin cookies and so on and so forth. But instead, I decided on the natural route. The “pumpkin/pumpkin spice” flavor popping up on store shelves has very little to do with an actual pumpkin anyway…and is more about cinnamon, allspice, ginger and nutmeg. A delicious combination no matter what you call it.

As a retired dietitian, I must add…a pumpkin (technically a fruit, but masquerading as a vegetable) is quite nutritious – full of Vitamin A, fiber and other fun micronutrients.

Last but not least…

Let’s not forget: pumpkins are multi-purpose.

If not cooked into various yummy treats, there is always the carving-into-scary-faces route.

It is October after all.

I would hear their voices…while they walked up the driveway.  Waiting by the side door, I watched through the glass. Little witches, clowns, princesses, ghosts, pumpkins, monsters, ballerinas….about to ring the doorbell.
They remembered my house.
And they were excited about pencils.
It was October 30th. The night before Halloween.
Trick or treat night where we lived for 37 years.

I wasn’t always the pencil lady.  I handed out fun size Snickers and M&M’s like everybody else that first Halloween in our new neighborhood. It was 1980. But my conscience won out a few years later.

I worked as a dietitian at the local hospital. Cautioning my patients to avoid sweets and eat a balanced diet. Somehow giving out those exact items to young children seemed…well hypocritical. And I was young and very idealistic at the time.

…which I ordered from a catalogue. A box of 12 dozen Halloween Pencils.
In 1985 I started using the lid to record how many we gave out every year. Including how many went to school Halloween parties. I didn’t know it at the time, but 2015 would be my final year as the Pencil Lady. I had already refilled the box before we moved.

As Halloweens went by, I discovered that decorative pencils were not popular with every trick or treater. Especially the older ones. For example:

A group of large size, teenage-looking ghastly creatures came by one year. Fake blood. A few in their football uniforms. Rubber monster masks. Practiced nonchalance. All holding out pillowcases filling up with candy.
“Happy Halloween!!” I greeted them.
“Trick or Treat” they monotoned.
I held out the pencils, ready to drop one in each pillowcase.
One  creature looked at me with alarm: “Pencils?”
“Yes! Pencils! They are great for school. You don’t have to take one if you don’t want to!”
The next morning I looked for and usually found a few broken pencils in the front yard.

When I was growing up, our dentist lived at the end of our street. As I trudged to his house dressed in my hippie/flower girl/hobo costume, I knew I could count on Trident sugarless gum. Which was fine with me. Another neighbor handed out homemade popcorn balls. Another one gave us apples.  My favorite: Mounds bars and peanut M&M’s. The trading back at the house with my brother and sister was intense. Almost as fierce as swapping houses and hotels in Monopoly. My brother often had an unfair advantage as he would trick or treat twice – changing costumes in between. I personally wished I’d thought of it first, although he only got away with it once. That I know of.

When my children reached trick or treat age, we celebrated with costumes and pumpkin carving. Candy trading. Traditions evolved.
Chili became Trick or Treat night supper since it was a fast one pot meal. My son and daughter trick or treated together in our family friendly neighborhood until she left for college. Either my husband or I usually tagged along. Not because they needed us, but because it was fun.

After they were both grown and out on their own, it was trick or treat from my viewpoint as the Pencil Lady. Those little faces so bright and expectant. Carefully climbing the 3 stairs to our side door; the light left on to welcome them.
From 5 – 8 pm every Oct. 30th, the doorbell rang and rang.
Costumes of all shapes and sizes – from lions and tigers to Sesame Street and Disney movie characters to robots made out of cardboard boxes – they were so proud.
The littlest ones trying their best to say Trick or Treat.
And, as they turned to leave, say Thank You.

I wonder if they miss the Pencil Lady.
She misses them.

Trick or Treat does not happen here in our over-55 condo community.
Although I suppose I could still hand out pencils in the lobby.