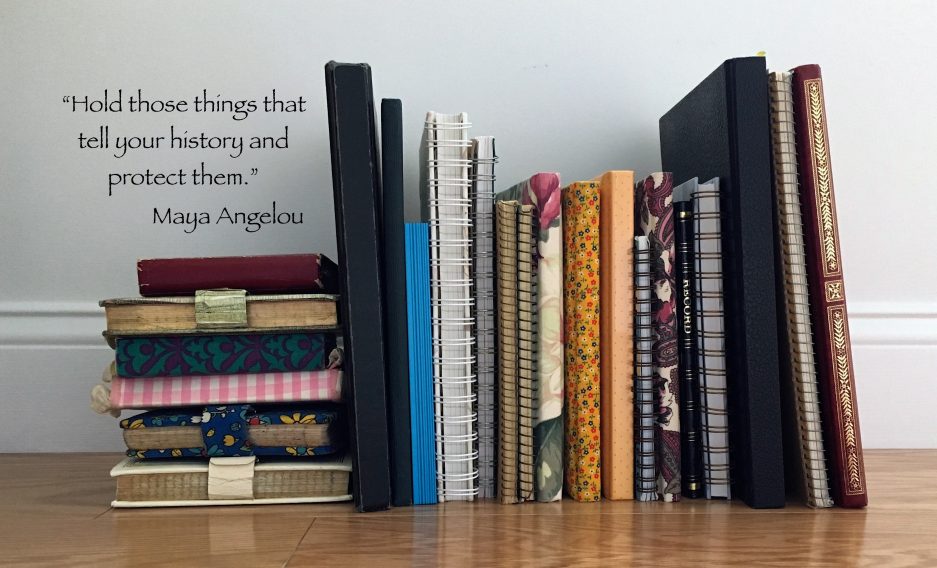 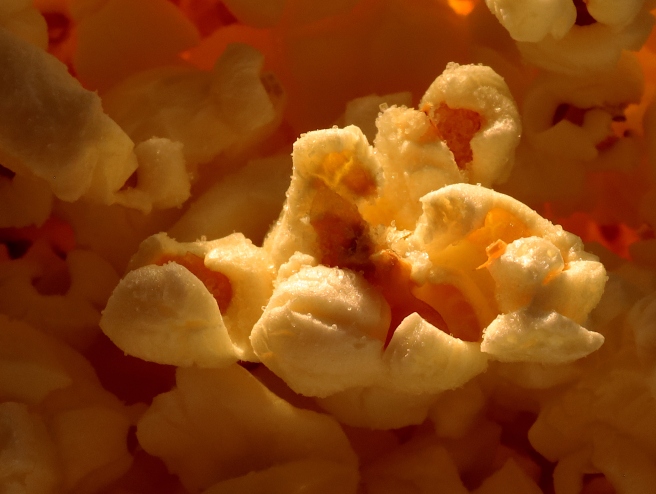 My husband and I have popcorn making down to a science of deliciousness, using an electric popper that stirs the kernels as they pop in extra light olive oil. We have tried sesame oil as well. Either oil does the trick for flavor and eliminates the need for butter. As it sits steaming in its clear plastic bowl, I add the salt.

Popcorn has been my snack of choice for decades. Last week a fresh batch caught the setting sun streaming into the kitchen…resulting in an impromptu photo session.

We were preparing for an evening of entertainment…stay-at-home pandemic style. One of many such evenings since March. First on the list was catching up on movies we had meant to see before the Academy Awards broadcast in February. Movies such as Bombshell and Richard Jewell, which feature nominated actresses. Both films were excellent.

We also discovered an amazing documentary from 2015: The Wrecking Crew. And checked out a movie released right before movie theaters closed…The Way Back.

Who knows when we will be able to enter a movie theater again the “old way.” Without worrying about our health and safety. Local theaters are opening this week but with new rules and procedures. I’m not sure when I will feel comfortable trusting that those sitting nearby will follow those rules. In the meantime, we have our own homestyle theater which works just fine. Along with the best popcorn around.

How many of you used to look for those white puffballs as a kid? Those mysterious used-to-be dandelions with fuzzy heads that mysteriously appeared every year – sprouting up in lawns most everywhere.

I did. I was never disappointed.

I’d gently pick one…carefully…at the base of the stem…and then blow the fluffy hairs all over the place. Or run around and wave it back and forth until the fluff was gone.

If I was really lucky I found a perfect one, all hairy things (as I called them) still attached. It didn’t go over too well with my parents who were trying to rid the yard of dandelions.

There are plenty of dandelions where I live now and nobody would care if I were to resurrect such rebellious behavior from childhood. I don’t think it is listed as a prohibited activity in the long list of condo Rules and Regulations.

However, now…I have a healthier respect for the natural progression of all things nature – as well as the fact that running through the woods waving an old dandelion would not be nearly as easy and carefree as it used to be.

I’d rather take its picture… 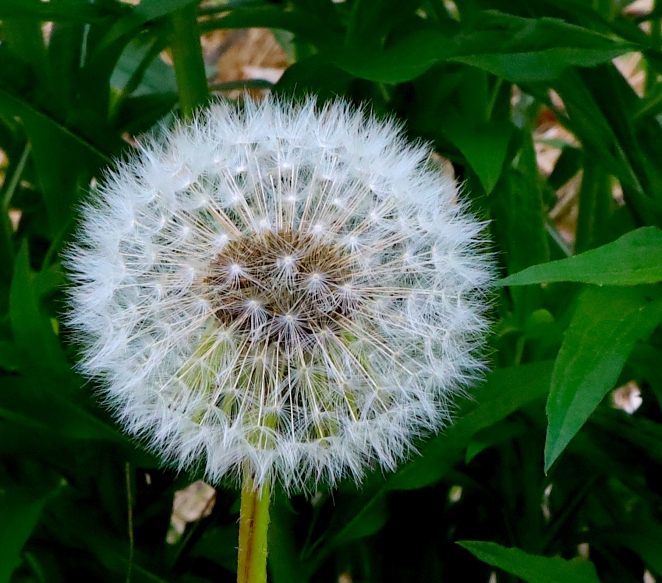 It got me thinking…what is a dandelion called when it gets to this stage of life…besides “old dandelion”?

How does it get from yellow petals to white seeds?

Apparently – and unsurprisingly – I’m not the only inquiring mind that wants to know. So for those interested…Ms. Google pointed me to a demonstration of the process on (where else) YouTube.

However, I could not find a consensus about an actual name for this stage except “white seed head”…”sometimes called blowballs or clocks.”

Mmmm…I think I prefer “puffball.” It has a nicer ring to it.

I look forward to Macro Monday as it is dedicated to getting up close to the endless beauties of nature. I enjoy exploring the woods behind my condo as a source of inspiration, macro camera at the ready.

However, last week I got sidetracked by the bathroom faucets from hell. Both the leaking old and the leaking new.

As a result, this week’s Macro Monday contribution is instead inspired by the past ten days of ridiculousness in my own insignificant small world. One of those home repairs you think is going to be simple…and straightforward…yet it ISN’T. So after three unsuccessful attempts by a professional (yes, three) you fix it yourself. It’s called reading the directions.

I suppose the only silver lining is the diversion it provided from the much more important realities outside my front door. And the feeling of accomplishment in my tiny sliver of the universe.

Before discarding “this” into the trash, I removed any savable parts…and lo and behold…a macro shot for “these days”… 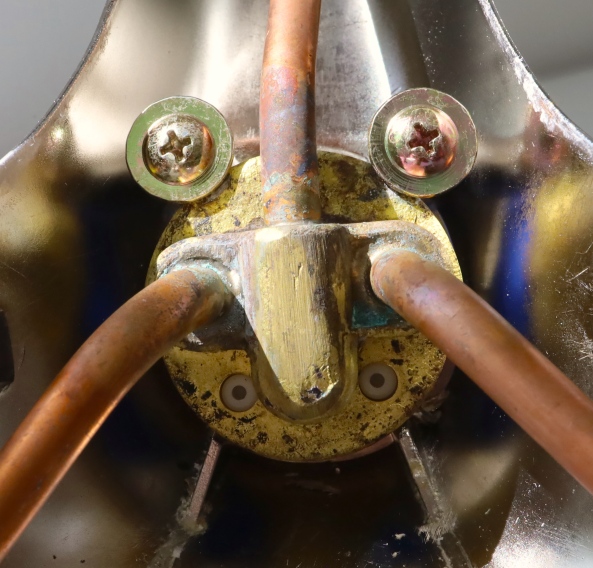 I took a slight detour during a walk downtown last week and found an empty bench surrounded by gorgeous blooming plant life. Lucky me. It was also one of those days when the persistent cloud cover unexpectedly shifts…lets a bit of sun poke through…and then closes up again. With little to no breeze. Thankfully my camera was close at hand.

I noticed all phases of flowering going on. Right next to me.

From the ready-or-not-here-I-come “before” to the Hello-World-here-I-am “after,” blossoms of all stages, shapes and sizes hung from a mass of leafy branches. I wondered if it was common to find such a variety on the same bush…at the same time. Or maybe I just never looked closely before. Yeah, that’s more likely the case. 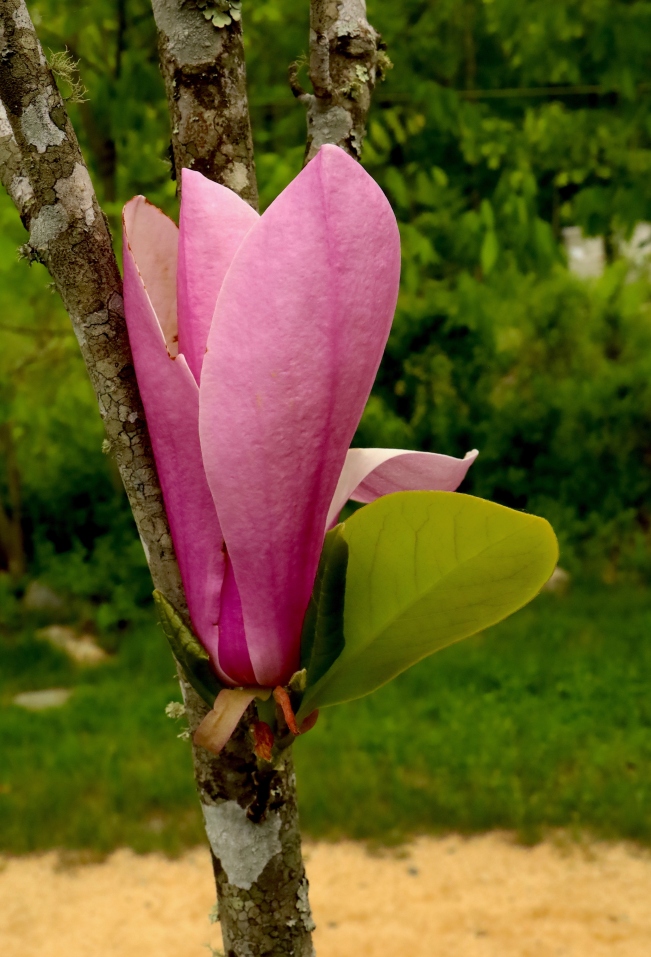 I have been keeping my eye on several trees near my condo…waiting for a day when the breezes were at a minimum. These blossoms have been hanging on for several weeks and I wanted to capture an image when the branches were holding still. Patience paid off last Monday.

As usual, I don’t know what kind of tree this is, but I look forward to seeing what happens next.

Sunlight streaming through a living room window offered a unique peak through the beautiful blooms on my Mother’s Day hydrangea plant. A gift from my daughter and her family. 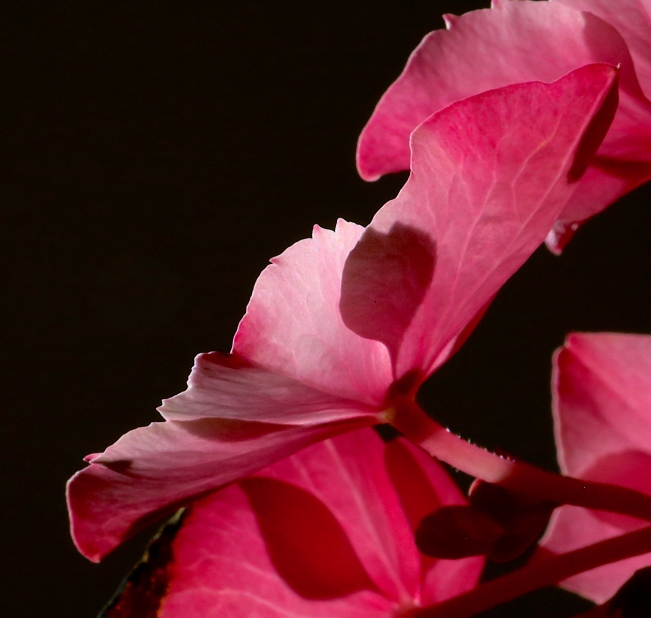 The buds are coming!

Or…more accurately…the buds keep coming. Every walk in the woods reveals a new set of leaves or flowers in the making. Hanging somewhat precariously from tree branches both high and low.

I no longer wonder too much about what kind of tree they originate from.

Right now…this stage of its life…is where the beauty lies.

No matter what happens next.

As my late father-in-law used to say…

There is no such thing as a weed!

Keep in mind that his life’s work was a business that involved searching deep in the woods – spade or hook in hand – digging up and collecting a wide variety of wildflowers and plants. Which he shipped across the country and overseas. I worked for him one summer while I was dating his son, my future husband. It was back breaking hard work. Under a cloud of bug spray, I was determined to keep up.  I had no idea what plant was what. But my father-in-law did and I was continually impressed at his expertise and memory.

So if there’s no such thing as a weed, then why all the weed killers for sale in hernia busting bags at the garden supply store…that happen to include “dandelion” on the list of what gets eliminated?

Is it because dandelions sprout up on their own…uncontrolled…independent…not easily contained in a neat boxed off garden bed? A splash of yellow appearing uninvited in the middle of an otherwise well tended green lawn?

I used to enjoy the grubby handfuls of dandelions my smiling young children would bring to the kitchen door. Carefully collected from various surprise appearances throughout our half acre…Mommy these are for you!

Yesterday, I spotted a dandelion that survived the condo association’s weed killing efforts. 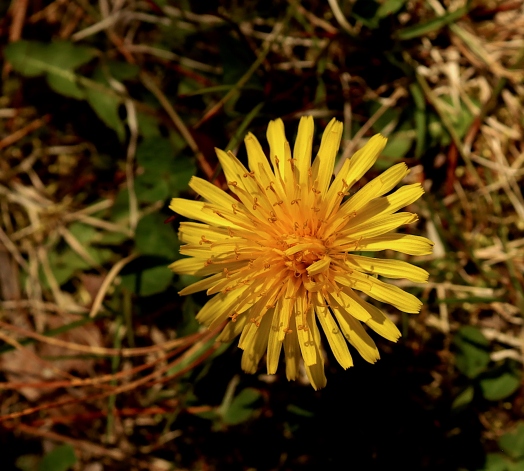 It was all alone in the sunshine.

The buds are coming!

I was excited to capture signs of spring during a (warm!) breezy day last week…and I am most grateful to report: Mother Nature marches on. 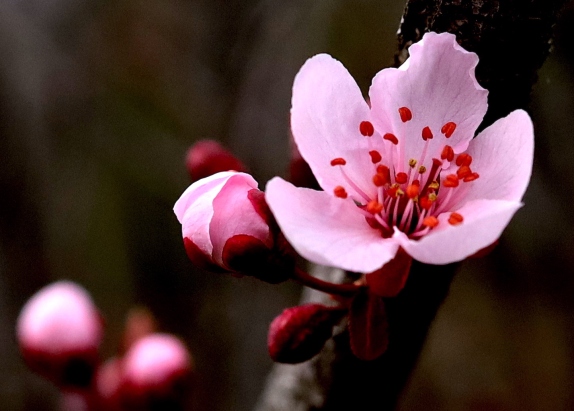 I am really looking forward to summer…

It is when one of my favorite fruits will be available at the local grocery store again.

And also when – hopefully – life will be back to normal.

one letter UP ~ diary 2.0
Blog at WordPress.com.