The focus this week is: next chapter. The implications may be personal, or strike a broader chord. 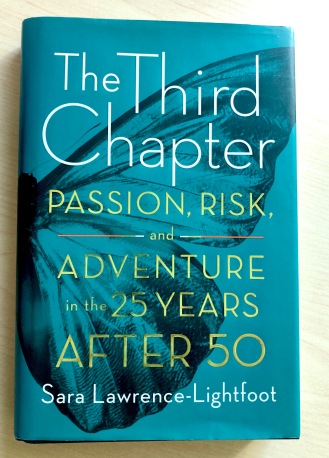 It is not often that I read a book and stop, grab a pencil (usually a pencil because writing in permanent ink feels just plain wrong) and underline…or trace a vertical line on either side of a Paragraph That Resonates. Resonate was a favorite writing group word when we’d politely critique fellow writers’ first drafts.

Does this resonate with you, the reader? If it does, why?

One such book on my shelf – which made the cut when we downsized to a condo – had to do with chapters. In fact I bought it the year before we moved, but didn’t read it until 2017 – a few months after settling into our Next Chapter. It definitely resonated.

I rarely buy books anymore. No room. In fact this one is a hardcover…a rarity as well.

What a title! Who writes about older people and aging with such genuine interest and positivity? I mean…”passion, risk and adventure” don’t generally get mentioned in the same sentence with the over 50 crowd.

She writes with eloquence and detail in an immensely readable account of her 2 years of interviews with 40 American women and men who fit in this age group (50-75). People who changed their lives on purpose and with purpose. She tells the stories of how they got to where they are now – at a stage of life previously ignored or minimized for its potential and significance in our culture.

She had me at Introduction: Facing the Mirror where she begins discussing the process she went through in formulating the idea for this book…wanting to focus on…

…moments when we manage to resist the signs of burnout, make peace with the old/new mirror image, and refuse to be preoccupied with our chronic laments about aging or our sadness about our vanishing youth….

Many of the men and women I interviewed spoke passionately and longingly about how the Third Chapter is a time when they have finally been able to face the deep injuries of their childhoods — assaults that they have ignored, repressed, or fled from for most of their lives….

The stories she shares weave life experiences with an academic slant that I appreciate. She admits her subjects were actually able to embark on these new adventures because they were financially secure and had the means to make the choices they made. But this does not minimize the significance of their achievements.

What it did for me was bring into focus the alternate possibilities that might be out there – far different than what my mother’s generation saw for themselves. At least as far as I knew…from observing my own mother’s experience and struggling world view during her “third chapter.”

Even though I realize I wouldn’t follow in the footsteps of the more adventurous subjects interviewed (this blog has been my biggest adventure so far), it was inspiring nonetheless. There is also validation in seeing how someone steps outside the box of what aging has always looked like.

This attempt at a book review is mostly meant to whet your appetite for this remarkable book. My “next chapter” continues to be a work in progress – especially these days. However…passion, risk and adventure?…still intriguing goals.

*Sara Lawrence-Lightfoot is an author, educator, researcher, and public intellectual.  She has pioneered an innovative social science method called “portraiture,” written eleven books, serves on numerous professional and scholarly boards and committees, and has received 30 honorary degrees.  A MacArthur Prize-winning sociologist, she is the first African-American woman in Harvard University’s history to have an endowed professorship named in her honor.

21 thoughts on “The Next Chapter”